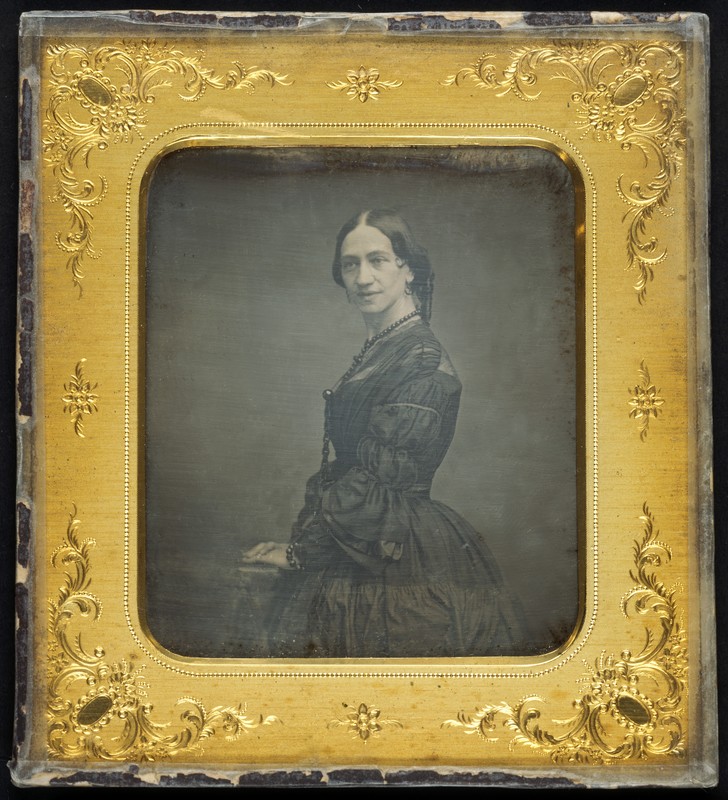 Tysk daguerreotypist. Carl Gustav Oehme (1817-1881) Fotografi 1856? Heiberg, Johanne Luise f. Pätges (1812-1890) skuespillerinde, forfatterinde. Tilhører Det Kongelige Bibliotek.
Carl Gustav Oehme (1817–1881) was a German instrument maker and photographer.
Oehme born in Berlin in 1817, and trained as a mechanic or mechanical instrument maker. He is reported as having visited Paris in 1840 where he met Daguerre, and learned the rudiments of the daguerreotype process from him, returning to Berlin in 1841 where he was one of the first artists to exhibit daguerreotypes in Germany. While in France, he met fellow German L. Philipp Graff (1814–1851), an optical instrument maker and later professional photographer, and Graff also contributed daguerreotypes to the 1841 exhibition. Oehme and Graff went on to become two of the most important early photographers in Berlin. Oehme opened a studio in Berlin in 1843 at No. 20 Jagerstrasse, from where, trading as Gustav Oehme, he produced daguerreotype portraits for many years. He was still using the process into the later 1850s. Some sources suggest that he also operated a portrait studio in Hamburg 1854/5, but this has yet to be confirmed. Oehme’s surviving daguerreotypes, predominantly 1/6th plate size, evidence masterful control of soft yet directional lighting, and a sensitivity towards posing which gave his group portraits a natural appearance which belies the long exposures necessary. (Daguerreobase.org.)